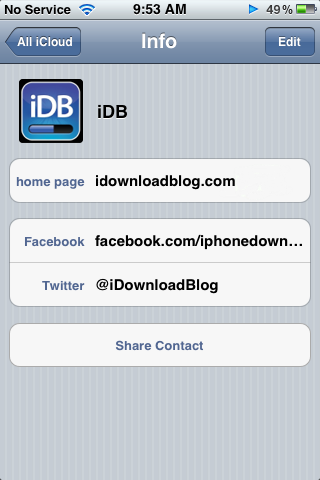 iOS 5 was released last fall with deep Twitter integration throughout the entire operating system. Many speculated that Apple would also add Facebook integration, but the day never came. You may also remember rumors of an Apple and Facebook partnership back before iOS 4 debuted.

This could be changing however, as iMore discovered iOS code referencing Facebook…

Facebook integration across iOS would most likely follow suit with Twitter, allowing you to post status updates and photos from different parts of the operating system. It’s not clear if Facebook will come integrated in future versions of iOS 5 or perhaps iOS 6 — if ever. It’s worth noting that code references don’t always mean that the feature is for sure coming.

In addition to today’s report, iMore also discovered some prototype names for the iPad 3 in the recently released iOS 5 Beta 3. In November, DigiTimes had revealed the same two prototype names: “J1” and “J2” for the iPad 3. The “J1” likely refers to a Wi-Fi version, while the “J2” refers to the Wi-Fi + 3G version.

The iPad 3 is rumored to launch sometime this Spring, perhaps March, with a quad-core A6 processor, Retina Display, and 8-megapixel camera.