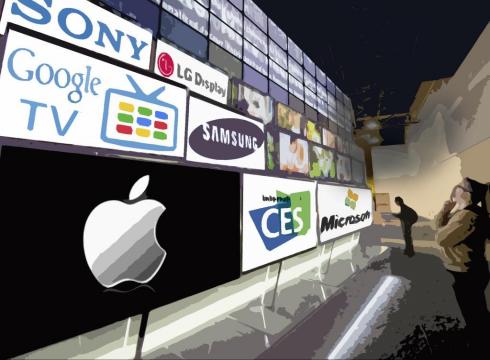 Not many companies can claim to be the biggest thing to hit a trade show without actually being in attendance, but Apple has that honor this year. With so much talk about the iPhone and iPad maker being ready to enter the television market, the competition is already sitting up and taking notice.

Not only that, but word has it that Apple is currently working on a 42-inch television in design guru Jony Ive’s top-secret studio. The flatscreen supposedly has onboard Wi-Fi and also comes in a 50-inch flavor. Rumors of such a device are keeping competitors on the edge of their seats.

According to USA Today, Apple is already the talk of CES, one of the most popular technology trade shows in existence. Potential Apple iTV competitors attend the convention, and everyone is waiting to see what move Apple will make next.

Anonymous sources for USA Today have suggested that the biggest stumbling block for Apple right now is the lack of content deals, with the pay-per-view model the company wishes to use seemingly going against everything the TV content companies stand for. Why let customers choose what they pay for when you can make them pay for a dozen channels they’ll never watch?

Whether Apple does plan to enter the fray or not, Paul Gagnon at DisplaySearch believes that any release of an Apple television is at least a year away due to the lack of large-scale panel orders with vendors.

One thing is abundantly clear, and that is that this rumor isn’t going to go away. The only people more interested in the release of an Apple television than consumers is the possible competition. With iTunes and other streaming services built right into the set, how will Sony and its cohorts compete?

CES will no doubt see many television companies try to innovate in an already crowded marketplace. IP-based TV and fancy smart widgets will be the order of the day.

But without Apple’s design and user interface know-how, will anyone be able to compete?