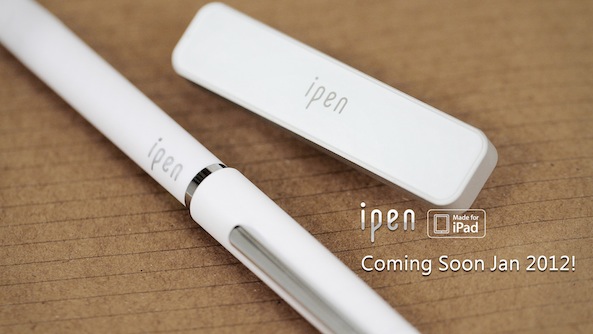 The humble stylus is something of a polarising accessory for iPad fans. With Steve Jobs famously being very anti-stylus, many Apple devotees look down on the pen-like writing device. But should they?

With the iPad proving so popular in many business situations, being able to write – and draw – precisely is a feature that many of us would love. Yes, there are styluses (or is it styli?) already out for for iPad owners, but if you’ve ever used one you will know that they have two major drawbacks: an unusually large nib, and their inability to work when your hand is resting on the screen.

Now a Kickstarter project is aiming to fix both problems, and if the videos are anything to go by, Cregle’s iPen may well be the solution we have been looking for…

Already massively over-funded project promises to bring precision writing and drawing to Apple’s iPad by using a combination of hardware and software, with a receiver being attached to the iPad via its 30-pin dock connector. This allows precise recognition of pen touches, as well as the elimination of the “hand on the screen” factor that can prove so irritating.

The Cregle iPen transforms the iPad into a content creation device, not just a content consumption device. iPen is the first active digitizer stylus that allows you to write with precision directly on the iPad. Unlike the passive digitizer used in the typical iPad stylus, iPen writes like a real pen with accurate positioning and palm rejection features that passive products simply cannot achieve. With the Cregle iPen’s active digitizer, the attached receiver picks up the iPen’s signal and its precise position as it hovers above the screen. This crucial advantage allows iPen to actively transmit 60 samples per second to pinpoint the pen’s exact location.

In order to take advantage of the iPen, apps will need to be written to support its unique abilities. Numerous apps already have support built-in, with various drawing, painting, and note-taking apps on an already extensive list.

If you have already missed out on the iPen at the Kickstarter stage, it should retail for around $89 when it goes on general sale in early-2012.

We can’t wait to get our hands on the iPen, but things may not be quite what they seem with this Kickstarter project.

It would appear – and we stress the would “appear” – that the Cregle iPen may be a rebadged product that is already on sale, and that the company is simply using Kickstarter as a platform for gaining publicity. One thing that is beyond any doubt is the public’s interest in the product, whether it is technically already on sale, or not.

If something fishy is indeed going on, we would be interested to see Kickstarter’s reaction. The site was set up to help independent entities get their products off the ground, not to act as a PR vehicle.

We have reached out to Cregle for clarification.