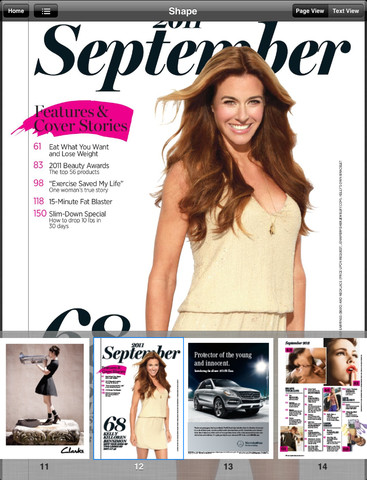 Amazon has pushed out a major update to its universal iOS Kindle app, with the most interesting changes coming to the iPad version.

A new design has been rolled out for magazines on the iPad, with access to the same 400+ magazines and newspapers that the Kindle Fire has now available on Apple’s tablet.

Users can now also “read print replica textbooks,” which will have rich formatting and the same layout as the print editions…

Other changes to the app are available for both the iPad and iPhone/iPod touch versions, with “Sent to Kindle” now available for iOS users, allowing them to send documents to an email address and have them show up inside the Kindle app. This also ties in with Kindle’s iBooks-like ability to store and open PDFs, with all the usual contents and thumbnails that accompany them.

The update brings the iOS version of Amazon’s Kindle app to the same level as the Kindle Fire on a couple of points, while bringing it up to speed with the PDF-reading abilities of Apple’s Kindle competitor, iBooks.

The new replica textbooks are also an interesting addition, and something that anyone who carries around textbooks will no doubt be very interested to learn about.

Amazon’s Kindle app for iOS is free in the App Store.