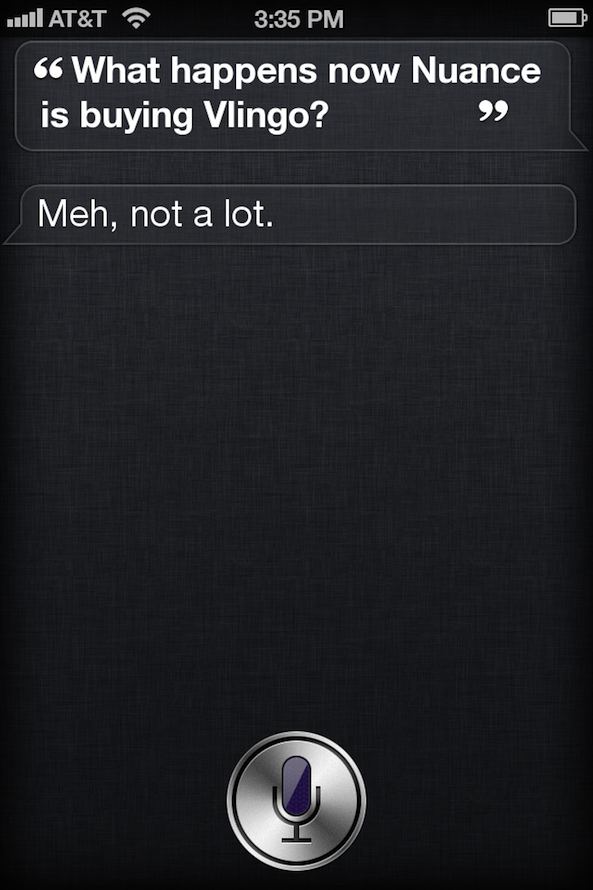 It seems Apple’s introduction of Siri to the world of smartphones has had an unexpected affect – it has stopped the ongoing legal wrangle between two competing natural language software development companies. So much so that the pair are now in cahoots.

Both Nuance and Vlingo have been at each other’s throats over perceived patent infringement, but the pair are now best buds after Nuance announced that it was to buy Vlingo, the same firm it took to court not that long ago.

The reason for the sudden turnaround? The pair seem to think that they need to join forces against a common enemy, namely, Apple…

In a statement as part of the buyout announcement, Nuance’s mobile unit head man Mike Thompson said Siri’s introduction has led to the competition in the smartphone arena now trying to play catchup, and that Nuance & Vlingo can benefit from that.

“Inspired by the introduction of services such as Apple’s Siri and our own Dragon Go!, virtually every mobile and consumer electronics company on the planet is looking for ways to integrate natural, conversational voice interactions into their mobile products, applications, and services.”

It is always strange when seemingly sworn enemies join forces in order to take on a bigger, more powerful foe. It may be the thing of movies, but this is very real.

Quite what happens now is anyone’s guess, with Google and Microsoft already working on their own Siri alternatives with varying degrees of success. We are not really sure where Nuance expects to go from here, unless they intend to go the app route just as Siri did in its original incarnation.

Whatever happens, it is becoming abundantly clear that Apple stole a march on the competition with Siri, and natural language speech recognition is here to stay.

Now we just need Siri to be able to understand accents!