Before the iPhone came along, the US smartphone market was dominated by a couple of major players. RIM, Palm, and the few third-party manufacturers that made Windows Mobile handsets ran the show.

But everything has changed over the last few years. Not only has Apple entered the market and overtaken the aforementioned companies, but so have handset-makers sporting Google’s popular Android OS. So, who’s the top dog in the US now?

According to a recent report from Nielsen, a highly regarded marketing research firm, Apple is the top smartphone manufacturer in the US. Nielsen’s research shows that Apple currently has about 28.6% of the smartphone market. 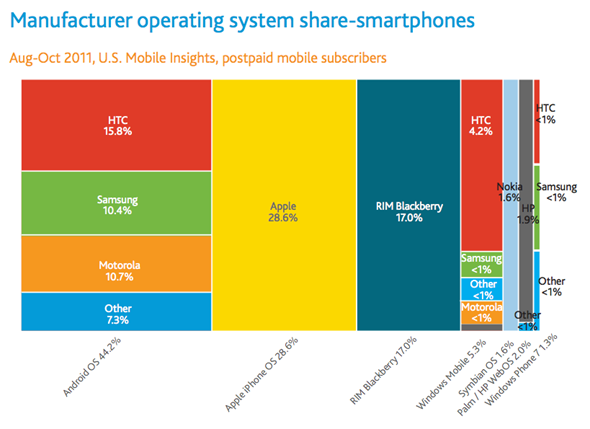 Believe it or not, RIM’s BlackBerry line is still popular enough in the States to put the Canadian company in second place with 17% marketshare. HTC comes in third place with 15.8% of the smartphone market, and then Motorola and Samsung with just 10%.

Obviously, when it comes to mobile OS marketshare, Android wins. But there are three major (and several minor) Android handset-makers, and Apple is the only company producing iOS hardware, so the above-mentioned statistic is pretty relevant.

Keep in mind, however, that Samsung, Motorola, and Apple have all just released flagship handsets, so these numbers could be completely different in 6 months. If you want to read the rest of Nielson’s report, RedmondPie has a great breakdown.