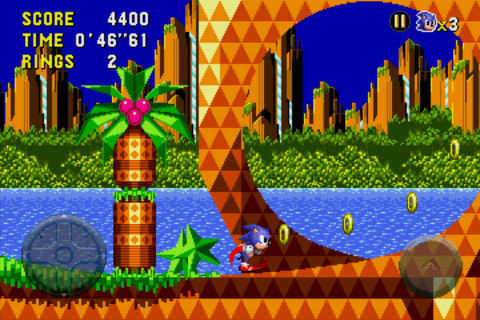 Before we get any further than the opening sentence of this collection of words we like to call “a blog post,” there is one thing that needs to be made abundantly clear: Sonic is without doubt one of the highlights of the 1990s. Furthermore, Sonic CD is probably the highlight of a series which has since lost its way in a sea of mediocre spin-offs and reboots.

That said, Sonic CD for iOS certainly appears to have what it takes to make us forget about the last 15 years or so of trash that has come out of Sega’s Sonic team, and return us to the speed-filled glee that is directing a blue, spiky creature through 2D levels.

Sonic CD coming to iOS is something of a big deal, especially if you were a big fan of the original. We were, and giddy doesn’t really come close to how we felt when hitting that “Buy” button on the App Store. If first impressions are anything to go by, our hopes were not misplaced.

If you’re not old enough – that’s a scary thought – to remember Sonic CD, it was the game which brought Sonic to the Mega CD, or Sega CD depending on which territory you happened to live in at the time. If you don’t know what the Sega CD was, then you’ll want to head on over to the always accurate Wikipedia for a wee bit of educating. You know that PS3 or Xbox 360 you have under your TV? The Sega CD was the first machine to use spinning discs as a way of getting games into players’ hands. It was a piece of history, and it’s all-but forgotten.

Misty-eyed reminiscing aside, Sonic CD is now available for iOS as a universal app, and can be picked up for just $1.99 as part of an introductory offer.

After a short play this morning, we think Sega may just have finally gotten one of its old Genesis ports right. Sonic CD runs at a blistering pace, just as any Sonic game should.

Our friends at Touch Arcade possibly put it best:

“In a word, Sonic CD is incredible. It redefines what gamers can expect out of retro iOS ports, while simultaneously making all of Sega’s existing ports look absolutely horrid in comparison.”

We can’t really argue with that!

If you’re an old-school gamer then you’ll probably want to give this a shot while the price is nice and low – be sure to give us your mini-review in the comments!