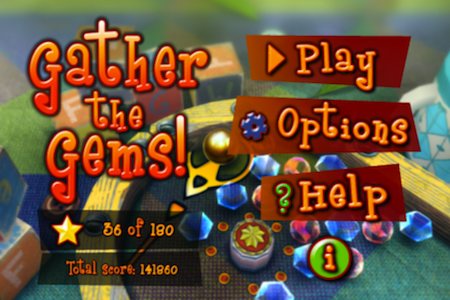 I’ve come across a couple of really solid iOS games in the past few weeks. First, there was Where’s My Water. When Apple started giving the game away I had to check it out. Then there was Heads Up. The RockLive title is about as addicting as they come.

So, needless to say, I was a bit skeptical when I was asked to review Gather the Gems. It falls in the same quick-play category as the aforementioned titles, and there’s limited space on my device. Can Gather the Gems earn a spot on my home screen? Read on…

Upon first opening the app, you get a pretty good idea of what the graphics are going to look like. They’re kind of blurry and don’t appear to be taking advantage of the iPhone’s Retina display (which is disappointing), but they’re still attractive. Now on to the gameplay.

I would describe Gather the Gems as a cross between Labyrinth and Pinball. Using a large marble-like ball, you must collect all of the gems laid out across a game board. The ball’s movement is determined by a golden arrow that constantly orbits the ball in a clockwise fashion. If you want to send the ball up, you must wait until the arrow hits the “12 o’clock” position and then quickly tap the screen. It’s a bit tricky at first. 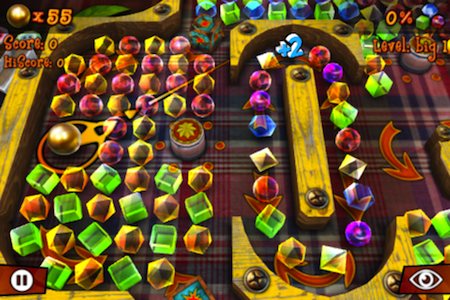 But once you get the hang of it, the game is rather fun. Each level features a different layout with different obstacles, and a different number of chances to collect the gems. For example, a tougher level may give you up to 10 chances to collect all of the gems (hint: each time you make the ball move, it counts as a chance), while an easier level might only offer you 3 shots. Collect all of the gems on the board to advance to the next level. 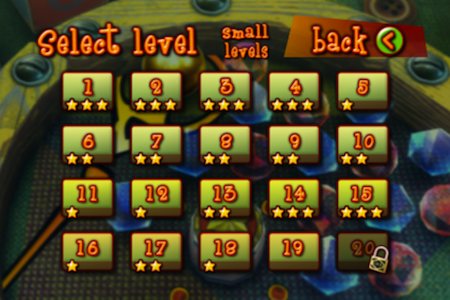 There appears to be about 60 levels in all that are split up into three categories: small, mid size, and big. I found myself staying in the small levels as the larger ones seemed way too tedious to be fun. The “big” level that I tried allotted me 55 chances to pick up what seemed like hundreds of gems. This didn’t offer me anywhere near the same instant gratification as the other levels did, so I respectfully bowed out.

But all together I have to say that I really like the game. It’s even earned a spot in my “Games” folder on my iPhone home screen. It has all of the characteristics that I look for in what I call a “pick-up-and-play” title including quick load times, fast gameplay, and a charming soundtrack. And if you promised me you’d stay away from the bigger levels, I’d even recommend it to you.

If you want to check out Gather the Gems for yourself, you can download it from the App Store for $0.99.