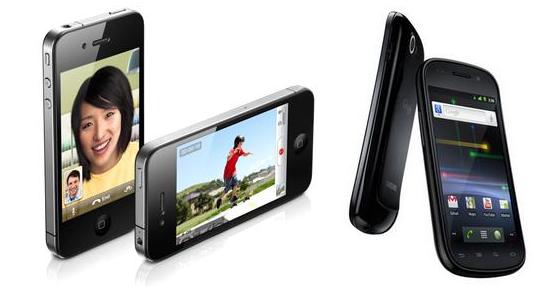 A new survey carried about by comScore claims that only 1 out of 10 American mobile subscribers own an iPhone, with Apple’s handset reaching the 10.8% mark as of October 2011.

The survey also suggests that Samsung is currently the top OEM in the country, with their phones currently in the hands of a quarter of all cellphone owners.

In fact, of the top five OEMs in comScore’s chart, Apple sits fourth, behind Samsung (25.5%), LG (20.6%) and Motorola (13.6%). Canadian firm Research In Motion takes fifth place with an ever-decreasing share of the market. Not great times for BlackBerry fans at all… 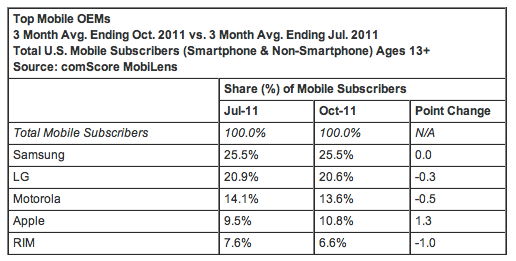 The situation on the platform side of things is rather predictable with Google’s Android sitting atop the pile, well on its way to making up half of the smartphones used in the United States with 46.3%. Having the top three manufacturers offer phones using your mobile operating system helps with Android’s market share dominance.

Apple’s iOS sits second with 28.1%, which is not to be sniffed at considering the number of handsets it’s running on. With just three models on sale; the iPhone 4S, iPhone 4, and iPhone 3GS, Apple offers significantly fewer models than the device’s that run Android currently. With that in mind, these figures should not be surprising to anyone not living in a cave for the last three years. 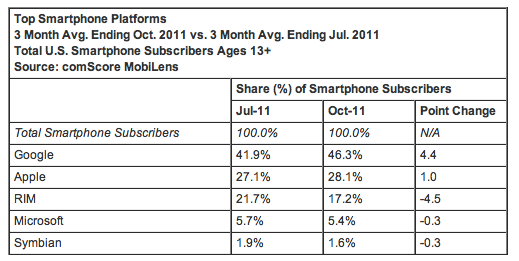 Both Android and iOS are gaining in share, while the competition from RIM, Microsoft, and Symbian are all slipping. Microsoft will no doubt be hoping to arrest that slide with an increased marketing push for Windows Phone 7 alongside the launch of Nokia’s first handsets using the WP7 platform.

Is anyone really surprised by any of these figures, or do they agree with what we all thought was happening in the market anyway?