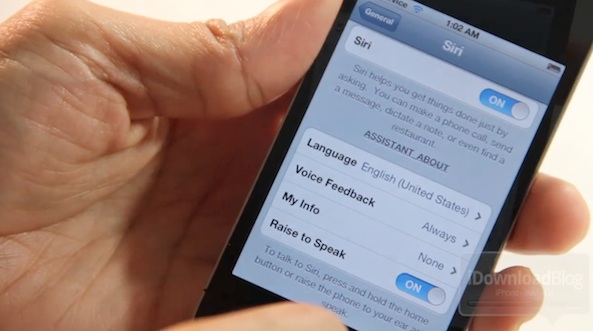 Ever since videos started popping up online of Siri working on non-iPhone 4S devices, everyone has wondered one thing: when will it be available to the masses? Apple has restricted Siri to its latest handset, so hackers have taken it upon themselves to set it free.

Up until this point, the digital assistant port has only been possible for knowledgeable folks with access to iPhone 4S files. But a jailbreak utility has just surfaced in Cydia that could change that. The app is H1Siri, and it claims to offer full Siri functionality on the iPhone 4…

This greatly differs from the Siri0us software that we showed you last week, as Siri0us only offered a hacked-up version of Siri’s Dictation feature. H1Siri, on the other hand, says it offers the full Siri experience on any GSM or CDMA iPhone 4 running iOS 5 or 5.0.1.

The package is only available on a custom repo, so you’ll have to add a URL to your list of Cydia sources. Do this by opening Cydia, selecting the Manage tab, Sources, Edit, and then add http://www.iphone3gsystem.fr/cydia/. Then just do a search for H1Siri.

You’ll notice that Cydia warns you about the repo because it contains cracks and other illegal software, which iDB does not condone in any way. In fact, we were very skeptical of mentioning the package for several reasons. First off, it comes from an unknown developer and an unknown source, which should always send up a red flag. Second, the only way we’ve heard that an actual Siri port is possible is by using illegal code.

And finally, as you can see, we haven’t gotten it to work yet. We’ve talked to a few people that claim they’ve gotten it to work in short bursts, but nothing significant. Extreme sketchiness aside, this is one of the first Siri-on-Cydia apps we’ve seen. And while we suggest waiting for a more stable, legal release, adventurous do-it-yourselfers might enjoy tinkering with the above method.

Let us know if you see any success.

Update: Several prominent developers, including chpwn, have confirmed that H1Siri does indeed use copyrighted binaries from the iPhone 4S. Not only is this hack illegal, but you have to keep in mind that you are knowingly sending all of your personal data (texts, call data, etc.) through unknown servers that could record your activity.

The team behind H1Siri, a group of Chinese hackers called the CD-Dev Team, has confirmed that their servers are currently down and could be down for weeks. If you can’t use H1Siri, as the saying goes, you get what you pay for.