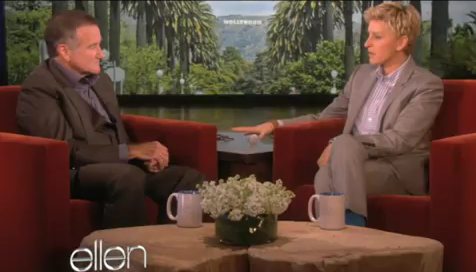 We love Robin Williams here at iDB. He’s just one of those comedians who clicks with us, and with a quick wit like his it’s hard not to laugh, especially when he’s working completely off the cuff.

We also like Siri, so when you have one of your favorite comedians using Apple’s digital assistant in a gag, it’s always going to be something to spark our interest.

When making an appearance on Ellen to promote his latest movie, Happy Feet 2, Williams ended up giving the audience the low-down on Siri in a way only Robin Williams can. The video is well worth watching, if just to watch Robin Williams’ genius at work.

Ellen asks Williams about Siri at which point the comedian launches into a tirade, pretending to be a French version of the assistant we’re all coming to love.

Williams himself recently admitted to being a fan of Apple’s iPhone 4S and Siri:

“I’m fascinated by the new iPhone. I bought it and kept trying to use it in France. “Siri, what is a good restaurant?” (In a robotic voice.) “I’m sorry, Robin. I can’t give locations in France.” ”Why, Siri?” ”I don’t know.” It’s like she was upset with the French or something. “They seem to have an attitude I can’t understand. Should I look for Germans, Robin?”

We knew Robin Williams was geeky – he named his daughter “Zelda” for heaven’s sake – but it’s great to hear he’s into his iPhones, too!

It seems that he isn’t the only one, ether.