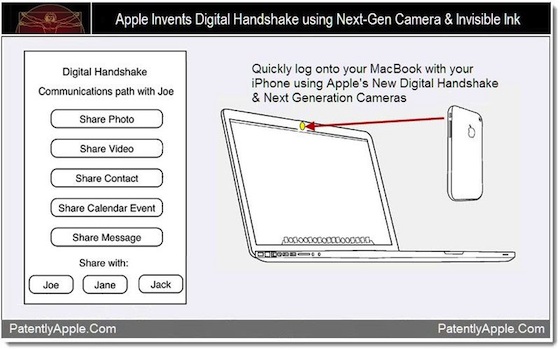 Patent applications aren’t always a sign that something is definitely going to make its way to market, but they can often be a good indication of the kinds of things companies are looking at adding to products.

That said, we have another patent application from the boffins at Apple, and this time it appears to be a new way of sending and receiving data between two devices. The system will use the devices’ cameras as a way of establishing a secure connection…

According to those eagle-eyed folks at Patently Apple, the device’s camera could be used to recognize distinguishing markings or an on-screen image in order to create the connection.

The situations in which something like this could be used are quite obvious: social networking, gaming, or even retail.

More interestingly, Apple also mentions users being able to log into devices, such as Macs, by using the iPhone. Presumably, the user would hold their iPhone, iPad, or other device up to a Mac’s FaceTime camera as a way of authenticating themselves.

Think of it as facial recognition without your face. It’s basically a digital handshake.

Would you like to see this kind of technology make it to market, or are passwords and PINs enough for you?