A new jailbreak tool is here, and it’s not from the Dev or Chronic Dev Team. The Pwn Dev Team has released Ac1dSn0w, a new tool for jailbreaking iOS 5 on the Mac.

Ac1dSn0w currently offers a tethered jailbreak on iOS 5.0 and 5.0.1 for users running OS X Snow Leopard or Lion. As an alternative to popular jailbreak tools like RedSn0w, PwnageTool and Sn0wBreeze, Ac1dSn0w is available for free right now.

I’m pleased to announce that we’ve just released Beta 1 of Ac1dSn0w for Mac OS X Lion (should also work on Snow Leopard). Ac1dSn0w allows you to jailbreak your iDevice tethered.  It also provides features like Tethered Boot, Pwned DFU, and Exit Recovery to get your device out of Recovery Loop.

Ac1dSn0w doesn’t support anything new. The same devices are able to be jailbroken with the new tool: iPod touch 4G, iPhone 3GS, iPhone 4, and first-gen iPad. The jailbreak for the A5-powered iDevices (iPhone 4S and iPad 2) has not been released yet in any form. 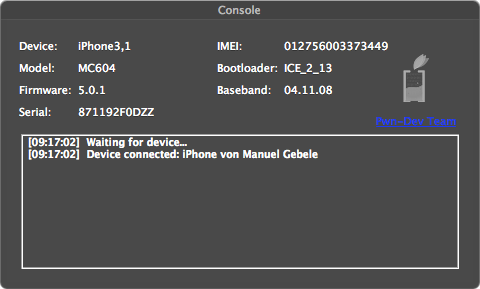 Ac1dSn0w offers a different type of interface on the Mac, and still lacks certain features that RedSn0w possesses, like the ability to create custom firmware packages.

There are, however, good things planned for Ac1dSn0w:

The current version of Ac1dSn0w is in an early development stage. In the future it will also be able to jailbreak remote devices. This means that you just need to install a server program on any OS (Linux, BSD, Windows) and Ac1dSn0w will jailbreak it on a client machine anywhere in the world.

The upcoming “iRecovery Remote” feature will allow you to talk to remote iDevices and send your own payloads, etc. over an internet connection. This particular feature is pretty exciting, as it hasn’t really been done before.

The Pwn Dev Team currently consists of 9 official members, and the team is led by a hacker that goes by the name of “P01sonN1nja” (not to be confused with p0sixninja of the Chronic Dev Team).

Refer to our full tutorial on how to jailbreak with Ac1dSn0w for more information.