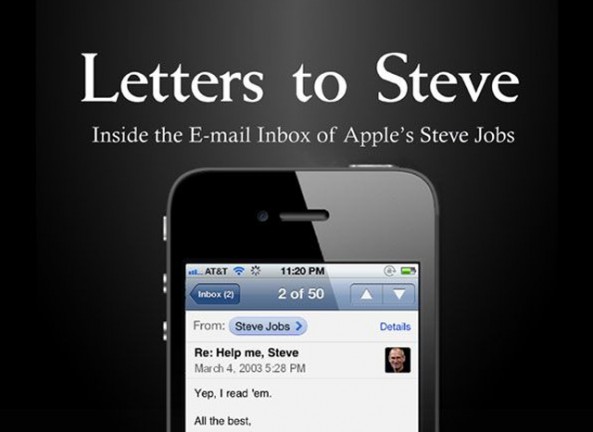 Steve Jobs was know for sporadically emailing fans and random inquirers from his public Apple email address. He would give famous one-liners about hot issues, like when he said that Apple wasn’t tracking its users during the Location Services scandal back in April.

Jobs would occasionally send out encouraging emails, like the time he emailed the Apple Store employees in Japan during the earthquake and tsunami disasters. All of these emails, and more, have been collected in a new eBook called, Letters to Steve: Inside the E-mail Inbox of Apple’s Steve Jobs.

The Kindle eBook was put together by Mark Milian, a technology reporter for CNN.

Through his incredible foresight and technological mastery, Steve Jobs touched billions of people’s lives around the world over several decades. He attracted a cult-like following that lined up to buy the computers and gadgets produced by Apple Inc. Over the years, people discovered the e-mail address of Jobs and took to regularly sending him messages. That he often responded was as unusual as his leadership style and his processes for crafting hit products.

Mark Milian, a technology writer for CNN, has reviewed more than a hundred of these e-mails, compiled from those posted by fans to blogs and online message boards. Some never-before-published e-mails from Jobs were shared exclusively for this book. As a whole, these correspondences provide a behind-the-scenes and inside-the-mind account of Jobs’ final and most triumphant years. During this time, he returned to Apple and led the beleaguered computer maker from the brink of bankruptcy to becoming the most valuable technology company in the world, while also managing Pixar Animation Studios, an innovative production company that rocketed the Walt Disney Company into a new era of family films.

This book is based on interviews with many of the customers and fans Jobs communicated with. These tales reveal the intricacies of how Jobs portrayed himself as likable and accessible through direct interaction with fans. He handled customer-service inquiries himself and carefully revealed hints about upcoming Apple products, guaranteeing headlines on blogs. However, some of these letters, when analyzed, provide a glimpse into his “reality distortion field,” in which he lobs insults, bends the truth and uses misdirection in order to manipulate anyone on the receiving end. This book has been self-published in digital form, and is not associated with or endorsed by CNN.

The eBook is available for Kindle on Amazon for $2.99. It looks like an interesting, easy read for those that have been following Apple throughout the years. It’s more than just the emails; Mark Milian weaves the messages together to create a story.

Let us know what you think of this book in the comments!