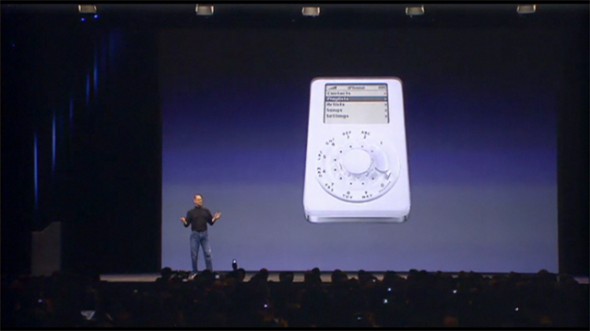 In January of 2007, Apple unveiled what would become one of the world’s most popular handsets ever: the iPhone. Steve Jobs himself took the stage to show the world what the Cupertino company had been working on for the previous two years.

During his typical display of showmanship leading up to the unveiling, the CEO jokingly pointed to a photo of a poorly-designed iPod phone on the projector. While the audience laughed, it turns out that the iPod phone actually existed at one point…

Patently Apple passes on an interesting tale in the recently-released Steve Jobs biography. The excerpt tells the story of how the iPhone came to be, and apparently a click wheel powered, iPod-like phone played a part in the device’s existence.

As the story goes, Apple’s executives weren’t completely sold on a touch-based user interface for its mobile phone initially. So they decided to set up two separate projects. One team was to design a phone using the iPod’s click wheel interface, and the other using a touch screen.

“After six months of working on the trackwheel P1 and multi-touch P2 phone options, Jobs called his inner circle into his conference room to make a decision. Fadell had been trying hard to develop the trackwheel model, but he admitted they had not cracked the problem of figuring out a simple way to dial calls.”

There’s even evidence of an iPod phone in Apple’s tall stack of patents. Patently Apple points to a 2006 filing that describes a cell phone that resembles an iPod, and uses a click wheel for navigating through its menus. And guess who’s listed as an inventor? Steve Jobs. 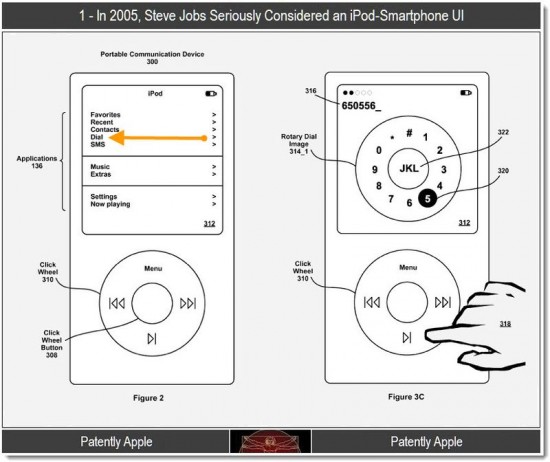 Obviously, we know which design prevailed, and it’s probably a good thing. Apple has sold over 100 million touchscreen-based iPhones over the past 4 years, and in the process, has set the bar for other handset manufacturers.

Would you have bought an iPod phone?