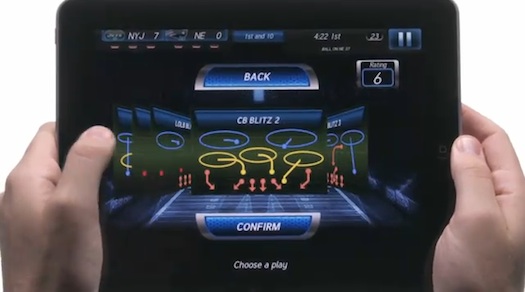 The iPad has invaded dozens of industries over the last year. Folks in the field of enterprise, education, health, and politics have seen the benefits of the iOS-based slate. Even professional football teams are starting to realize the potential of Apple’s popular tablet.

Earlier this year, we reported that Tampa Bay’s Buccaneers were trading in their play books for the iPad 2. Over 90 iPads were distributed to members of the coaching staff and players and, according to a recent article by CNN, they’ve proven to be a resounding success…

The report says iPads are an absolute hit with both Buccaneers players and coaches. The tablets are pre-loaded with the team’s full playbook, and game film so players can analyze their past performances and study their opponents.

The Buccaneers General Manager, Mark Dominik, says that the iPads have been a “smashing success” for the Bucs. Apparently, the team printed paper copies of its playbook this year as backups, but they haven’t used them. “We’re going green” next year, says Dominik.

But the NFL still has reservations about tablets on the field:

“Don’t expect to see the tablets on the sidelines of games, in locker rooms or in the coaches’ booth. NFL rules prohibit the use of any electronic computers, tablets or recording devices within 90 minutes of kickoff.

NFL spokesman Brian McCarthy says the league is “strategically holding back” on technology advancements. “We try to keep as much of the human element in the game as possible,” he said. In addition, he said, the NFL’s strategy is to keep competition fair among all the teams.”

Regardless, the success of the iPad with the Tampa Bay Buccaneers could lead to further adoption by other NFL organizations. And with over 3000 participating players, that could equal some serious tablet sales for Apple.

The funny part? The NFL is sponsored by Motorola, the maker of the Android-running “Xoom” tablet. We wonder why the players don’t just use that?