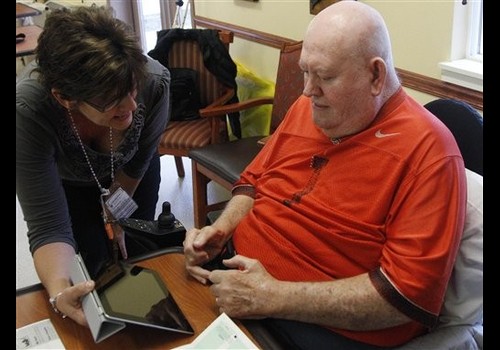 Not even Apple could have foreseen the impact its tablet would have across multiple industries. Health, education, enterprise, music — they’ve all been affected in one way or another by the popular slate. In fact, iPads are slowly replacing computers in public schools.

Now it appears that the iPad is set to take on another field. Politics. According to Yahoo News, Apple’s tablet is going to be taking a key part in a special primary election in Oregon today to replace former US Representative David Wu…

The voting will take place in 5 Oregon counties throughout the day, and according to Yahoo, iPads will be on-hand for voters with disabilities. The tablets will accommodate users with poor eyesight and dexterity, ensuring that everyone gets a vote.

Although voters will be using the iPads to cast their decisions, the ballots will still need to be sent in on paper. So once a form is completed, it will be printed out. Then nearby Election Officials will collect it and prepare it for processing.

The program is still in the pilot stage, but could end up being implemented state-wide. Oregon is obviously interested in the project, as it has reportedly spent over $75,000 developing tablet-specific software. Apple is also said to be involved, donating 5 iPads to the cause.

It’s interesting that whenever a state or government launches a tablet program, the iPad always seems to be at the forefront.