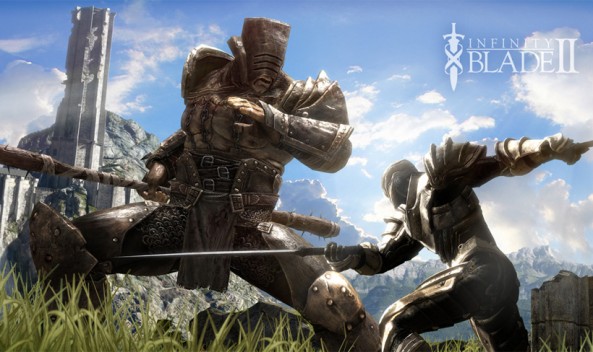 There’s no doubt that Apple’s mobile operating system is becoming a major gaming platform. Yesterday, we pointed to a report that forecasted gaming revenues from iOS and Android to exceed that of the handheld divisions of both Nintendo and Sony.

Every major gaming platform has to have at least one standout title, and for iOS, that might just be Infinity Blade. With its sharp graphics and epic gameplay, the original version of the game raked in $1.6 million dollars in just 5 days. And now it’s time for round two…

If you want to get an idea of just how big Infinity Blade 2 is, you don’t have to look any further than Apple’s iPhone event last month. The Cupertino company used the latest version of Epic’s action RPG to demonstrate its new handset’s graphic capabilities.

Sure, it looks good, but does it have the gameplay to back it up? (The original version received criticism in this department.) Here’s a hands-on impression of Infinity Blade 2 from popular gaming publication IGN:

“It’s impressive what Chair has been able to pull off. The original Infinity Blade launched with about 10 combat locations. The sequel has over 40. It seems virtually every element of Infinity Blade 1 has been blown out.”

The review goes on to mention one of the game’s new features: a new multiplayer mode that will allow users to team up with other players to complete missions and defeat enemies. Mix in the magic of iOS 5’s AirPlay mirroring, and you truly have a console-like experience.

Infinity Blade 2 is slated to hit the App Store on December 1st. And if it plays half as good as the trailer looks, expect the folks at Epic to have another hit on their hands. We think it’s safe to say that if you’ve recently purchased an iPhone 4S, this game will be a must-download.