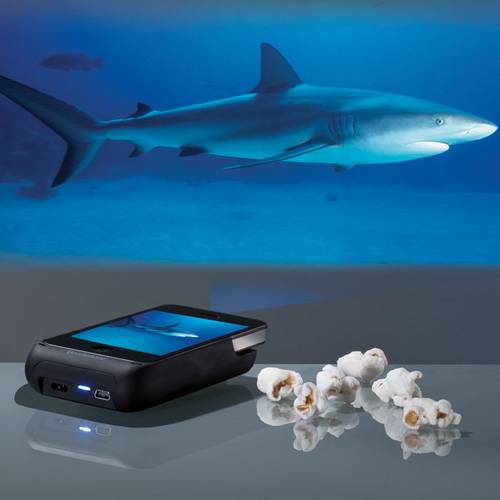 On paper, pico projectors seem like the perfect smartphone accessory. Even handsets with 4-inch displays prove to be a bit small when sharing media with multiple people, so a miniature portable projector makes sense.

But who wants to lug around an extra device? Isn’t that a major reason people own smartphones — so they don’t have to carry around multiple gadgets? Popular retailer Brookstone looks to solve this dilemma with its new Pocket Projector…

The new accessory features an integrated Texas Instruments DLP pico projector and a built-in 2100mAh battery combined in a slip-on case. The projector is capable of filling up a 50″ screen, with a resolution of 640 x 360.

Even though it’s a cool concept, the case does have its caveats. For starters, it’s extremely bulky — we can’t imagine carrying this thing around day-to-day. And at $230, the Pocket Projector is also fairly expensive. Especially considering it’s only compatible with the iPhone 4.

If you absolutely have to have a portable projector right now, it might be worth looking into Brookstone’s offering. Otherwise, we recommend waiting for Apple and other manufacturers to start integrating pico projectors into their devices.

What do you think of the Pocket Projector?