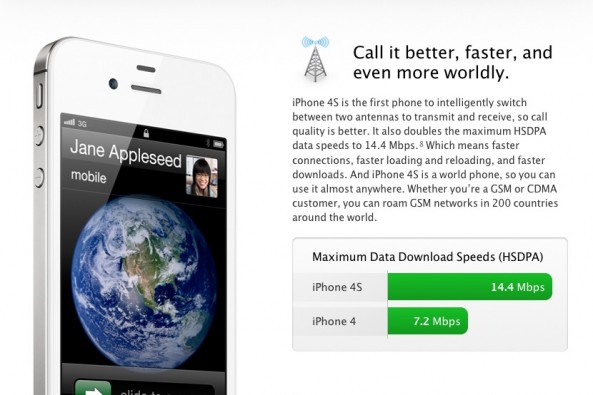 Remember how Consumer Reports refused to recommend the iPhone 4 because of its infamous reception problems? Now, the influential magazine has given the iPhone 4S a different diagnosis, coming to a rather different conclusion.

Consumer Reports is being considerably nicer to Apple’s latest iPhone, saying that it does not suffer from any of the antenna-related reception issues that plagued its predecessor.

As a result of the improved antenna found in the iPhone 4S, Consumer Reports is now willing to let bygones be bygones, and is happy to list the handset as a “recommended device.” But that’s not all…

Here’s what Consumer Reports had to say when comparing the iPhone 4S with other handsets:

“These pluses were not enough, however, to allow the iPhone 4S to outscore the best new Android-based phones in our Ratings. Those top scorers included the Samsung Galaxy S II phones, the Motorola Droid Bionic, and several other phones that boast larger displays than the iPhone 4S and run on faster 4G networks. (Technically, only the AT&T version of the iPhone 4S supports 4G, running on the carrier’s HSPA+ network at download speeds of about 14 megabits per second, the bottom rung of what is considered to be 4G network speed.)

Other phones that topped the iPhone 4S include the LG Thrill ($100 on AT&T), which has the ability to capture stills and videos in 3D, as well as display them on its 4.3-inch 3D display, and the Motorola Droid Bionic ($300 on Verizon), which also has a superb 4.3-inch, high-resolution (540 x 960) display, with excellent keypad readability under most lighting conditions, even in bright light.”

The unreliable and resource-intensive world of 4G is apparently enough to tip Consumer Report’s most favorable nod to other Android handsets. Apparently, 3D video makes the LG Thrill better than the iPhone as well.

Really? As if you needed another reason to laugh at Consumer Reports.

Apple made a point of mentioning its improved antenna system when announcing the iPhone 4S, and reports from users last month have suggested that this iteration is much better at holding a signal than the iPhone 4.

In our testing the iPhone 4S has been better at holding a signal in the same areas that the iPhone 4 would struggle, but we’re interested in hearing your thoughts on the matter. Let us know if your iPhone 4S is performing better, or indeed worse, than your iPhone 4 in the reception department!