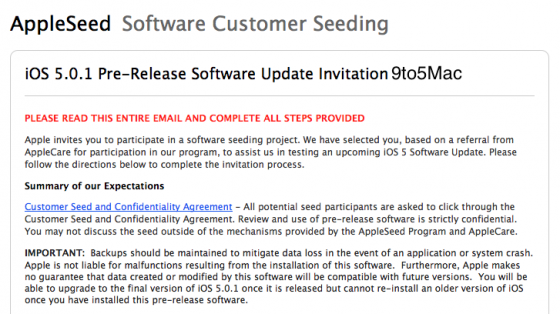 Apple is anything but predictable these days with its iOS refresh cycle. Last week Apple released not one, but two beta versions of iOS 5.0.1 to developers. Needless to say, that’s fairly unusual for the company on such an incremental update.

Apparently, the iPhone-makers are still baffled by the battery bug. Because now 9to5Mac is reporting that Apple is seeding iOS 5.0.1 to customers. The software is still considered to be in beta though, and is only available to select end users…

Apple is inviting some users that have been complaining about poor battery life after upgrading to iOS 5 to assist them in testing the latest update. It seems that the participants are being referred by Apple’s customer support department, AppleCare.

The Cupertino company has taken a lot of heat over iOS 5’s battery problems, as evident in a recent internal memo to its retail employees. 9to5Mac published the note, which directs workers on how to handle customer complaints regarding iOS 5 battery life.

Apple is now in its third stage of testing iOS 5.0.1, so you would think we were getting close to a public release. Hopefully by the time it’s ready to go, the battery problems will be completely resolved. We’ll keep you updated.