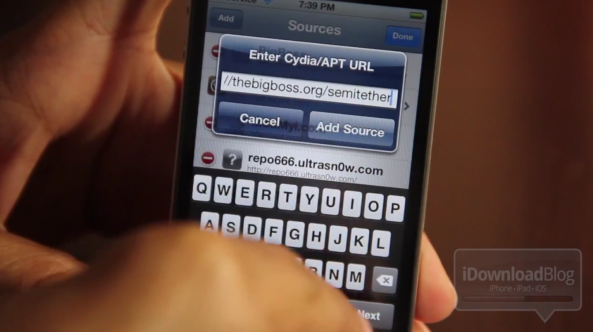 BigBoss has pushed an update to the semitethered jailbreak that brings multiple bug fixes and speed improvements. Version 0.7.9 of SemiTether is available in Cydia now for folks on iOS 5 that have jailbroken with a tool like RedSn0w.

The SemiTether jailbreak is being improved to make it a more viable contender to a full untethered jailbreak. BigBoss is working with saurik to improve his jailbreak alongside a mobile substrate Cydia update.

“Saurik is working on an update to mobile substrate that will solve many of the issues with the semi-tether package. Hopefully this will be out in a day or two. At this time, we can finalize beta testing. I plan to hold further updates until after Saurik has released his mobile substrate update. Saurik’s updates will eliminate the need for the long 90 second respring on boot also.

This update was only tested on iphone 4. After saurik’s mobile substrate changes, more devices will be tested. Next updates coming in next 2-3 days.”

If you’re confused about the difference between a tethered, untethered, and semitethered jailbreak, we explain it all here.

Here’s our video tutorial on how to install SemiTether:

Let us know what you notice in this update to SemiTether. Has the reboot time been improved significantly? Have you noticed any other improvements?