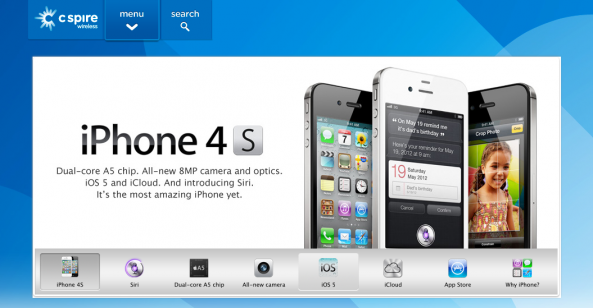 It’s just been announced that the iPhone 4S will be available on a fourth US carrier, and no, it’s not T-Mobile. Oddly enough, C Spire Wireless, formerly known as Cellular South, will be launching Apple’s next smartphone soon.

C Spire will join AT&T, Verizon, and Sprint as an iPhone partner in the US. T-Mobile remains left out in the cold…

The iPhone 4S is a world phone capable of running on both GSM and CDMA networks. Sprint runs on the same technology as Verizon, so the CDMA iPhone 4S works across those two carriers. The GSM iPhone 4S works on T-Mobile’s EDGE network, but the carrier’s unique AWS 3G frequency band keeps the iPhone from taking advantage of 3G speeds on T-Mobile.

AT&T and T-Mobile are in the process of merging, which is the likely reason why Apple hasn’t added T-Mobile as a partner.

According to Macworld, C Spire is the largest privately-held cellular carrier in the country. C Spire is a regional carrier that offers service in Mississippi, Tennessee, Alabama, and Florida. The C Spire network is CDMA, like Sprint and Verizon.

C Spire believes that it offers the best plan for iPhone customers, dubbed the “80/40” plan. Customers can have unlimited text, data, and voice for $80 per month, with $40 added with each new line.

Apple announced that it sold 4 million iPhone 4S units on launch weekend, putting the handset on track to become the fastest-selling consumer electronics product of all time. Adding more carriers to the roster will only help sales.

It’s nice to see the iPhone finally coming to smaller, underdog carriers in the US. We’ll be curious to see which carrier Apple’s smartphone comes to next.

Let us know if you end up purchasing an iPhone 4S on C Spire! Pre-registation starts today on the carrier’s website.