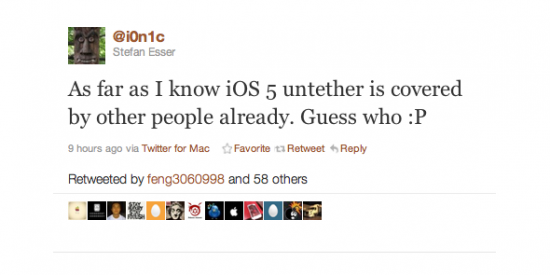 With iOS 5 scheduled to drop this Wednesday, the question in the back of everyone’s mind (at least here at iDB anyways) is when will it be fully jailbroken? A tethered jailbreak is already available for the new software, but it’s just not the same.

A tethered jailbreak is inconvenient, it means you have to reconnect your iDevice to your computer after every restart. Luckily it sounds like we won’t have to wait long for an untether to hit web, as i0n1c has confirmed it’s being handled…

If you don’t know i0n1c, you’re likely familiar with his work. The infamous hacker was responsible for the iOS 4.3.1, 4.3.2, and 4.3.3 untether. Earlier today, i0n1c told the Twitter world that the iOS 5 untether was “covered.”

“As far as I know iOS 5 untether is covered by other people already. Guess who :p”

Although he wouldn’t confirm it, i0n1c was likely referring to the Chronic Dev team, the group of hackers responsible for GreenPoisOn. The team recently announced that it’s found multiple exploits for the iPad 2 and the upcoming iPhone.

Regardless of who is working on it, an untether appears to be in the pipeline. And with developers pushing out updates to their jailbreak tweaks and utilities, things are starting to look good for early iOS 5 adopters. Stay tuned.