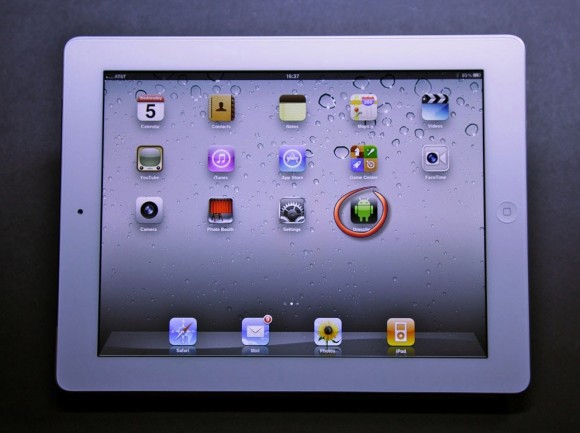 Great news for the two of you that want to run Android apps on your iPad!

Alien Dalvik, the software layer that allows all Android apps to run on the Android platform, is being ported to various different platforms, including BlackBerry’s PlayBook. More importantly, and certainly more interestingly, Apple’s iPad is also on the list of devices that will soon support Android apps…

While it’s almost guaranteed to offer an experience that lacks that special something, Alien Dalvick adds its own virtual machine between the Android app and iOS that should make the whole thing feel less glitchy than it sounds, though we foresee more than a few bugs creeping in!

“From a user perspective, Alien Dalvik 2.0 is completely transparent and installed without user disruption. Users simply enjoy the same rich Android ecosystem they have become accustomed to via mobile on other key screens, such as playing Angry Birds on HDTV. This all while gaining faster access to a wider range of apps, thus encouraging a higher frequency of downloads and increased ARPU.”

The real question here has to be whether there are any Android apps that we’re desperate to run on our iPads. Perhaps Google’s own Gmail and Music apps would be a plus for many iPad owners, but those just aren’t going to make the jump to iOS thanks to more licensing than anything really needs. Besides Google, most developers are sensible enough to either start on iOS, or port their apps across.

Are there any Android apps you’d like to use on your iPad? Do let us know in the comments!