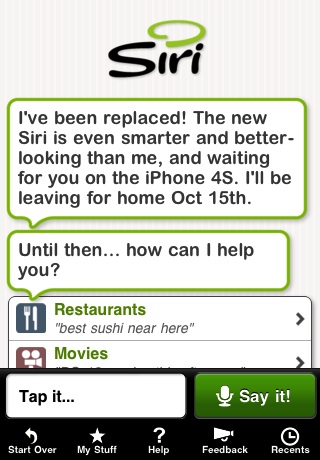 Siri Assistant isn’t new. The app officially launched in the App Store back in 2010. Shortly after that, Apple bought the company behind it, but kept the app alive in the App Store. But with integration of Siri into the iPhone 4S, what will happen to the app?

Well, it will go away. The app has already been pulled from the App Store, and a goodbye message appears when you launch the app now…

“I’ve been replaced! The new Siri is even smarter and better-looking than me, and waiting for you on the iPhone 4S. I’ll be leaving for home Oct 15th.”

As of October 15th, the app will be no more. Obviously, Siri is a big deal for Apple and they don’t want to keep supporting an app that uses old technology. This is also a nice way for Apple to say, “Hey, it wouldn’t be a bad idea to buy that new iPhone 4S.”

Did you use the Siri app? How does this shut down affect you?