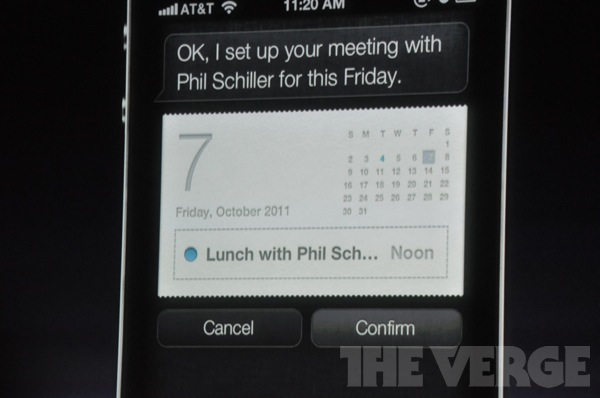 We’ve been talking about this for quite some time, and today we finally found out what Apple is going to do with its purchase of voice-based artificial intelligence business, Siri. As we’d expected, Siri is now going to be built right into the iPhone 4S, bringing advanced voice control to Apple’s newly announced handset.

During today’s special iPhone Event, Apple’s Scott Forstall showed off a variety of new and interesting ways of talking to your iPhone, with Siri doing the user’s bidding as if it was, scarily enough, a real assistant…

Forstall’s dog and pony show took us through setting new alarms, asking for the weather forecast around the world, and even setting meetings using just the power of natural voice commands.

Wolfram Alpha and Wikipedia also get in on the action, offering users a great way to win pub quizzes the world over. Using hands-free technology, users can now ask the iPhone real questions, with the answer being returned via the relevant source.

All the new Siri features are listed as a beta by Apple, and will be available in English, French and German languages for now.

This new feature is, unfortunately, an iPhone 4S feature only. Now we know what all that extra power is needed for!