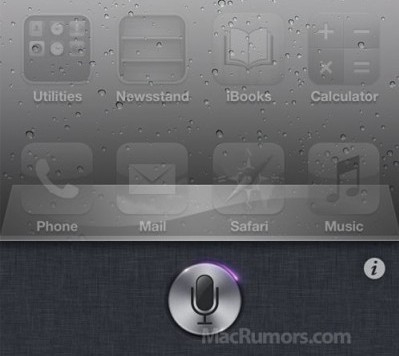 There has been a lot of controversy over Apple’s iPhone event tomorrow. Recent evidence has suggested that the company won’t be unveiling a device with an all-new design, but one similar to the iPhone 4 with improved internals.

Skeptics believe that an iPhone 4S wouldn’t be enough to power Apple’s smartphone sales in the face of growing competition. Why would anyone choose a non-4G device with a 3.5″ screen over offerings like the Galaxy S II? Assistant of course…

In a recent interview with 9to5Mac, Siri co-founder Norman Winarksy gave his opinion on Siri’s technology and what Apple’s rumored Assistant feature would mean to the world:

“Make no mistake: Apple’s ‘mainstreaming’ Artificial Intelligence in the form of a Virtual Personal Assistant is a groundbreaking event. I’d go so far as to say it is a World-Changing event. Right now a few people dabble in partial AI enabled apps like Google Voice Actions, Vlingo or Nuance GO. Siri was many iterations ahead of these technologies, or at least it was two years ago. This is REAL AI with REAL market use. If the rumors are true, Apple will enable millions upon millions of people to interact with machines with natural language. The PAL will ge things done and this is only the tip of the iceberg. We’re talking another technology revolution. A new computing paradigm shift.”

So will all of this equal handset sales? You bet. Apple’s legendary marketing team will take Assistant and run with it, drawing in millions of consumers in the process. But what about iPhone 4 owners? Will they drop another $200 to upgrade to a 4S?

Word on the street is that Assistant is very hardware-intensive. So much so, that it may require the next iPhone’s expected A5 processor and 1GB of RAM to run properly. If you want to use Assistant, it looks like you’ll have to upgrade.

What do you think? Will Assistant be enough to drive iPhone 4S sales?