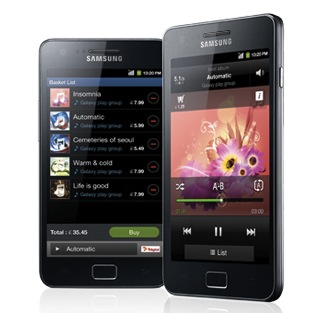 While Apple’s smartphone line consists of only one model, the iPhone, Google’s Android products are harder to keep track of. It seems like every week a new Android phone is launched by a different company with a catchy name and a set of “killer” specs.

With so many models touting top features, it’s been difficult to name a front runner to match head to head with the iPhone— that is, until now. DroidMatters is reporting that Samsung’s new Galaxy S II has reached the 5 million sales mark, and it hasn’t even launched in the U.S. or China yet…

The numbers are especially impressive when you consider that the phone is not yet available in China — home to nearly a billion cell phone users — or the U.S., another major smartphone destination. A version of the Galaxy S 2 is expected to launch on Verizon Wireless later this month.

The device sports a dual-core processor, 4.3-inch AMOLED Plus screen, and an 8MP camera with the ability to record videos in full HD. The phone is also expected to be 4G LTE-capable.

It appears that the Samsung vs. Apple battle has spilled out from the court room and into the smartphone arena. Now that we seem to have a front-running Android device, what will Apple do to respond? I guess we’ll have to wait until September to find out.

Are you impressed by the Galaxy S II at all? Or are you placing your bets on the iPhone 5?