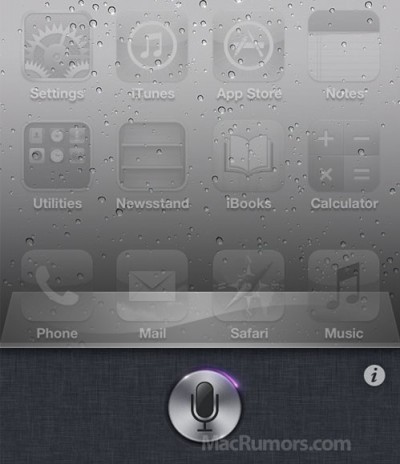 If you haven’t figured it out by now, there’s more to iOS 5 than meets the eye. Since the new software was unveiled in June, Apple has been holding some of its best features close to the vest as it fine-tunes them to perfection.

One of those top secret features is a system-wide utility known as Assistant. The voice-activated digital concierge can do anything from sending text messages to performing internet searches. Want to see how it could work?

MacRumors, in conjunction with a recent 9to5Mac report and their own information, has created an artist rendition of what they believe Assistant’s interface will look like (above). MacRumors’ Arnold Kim explains the feature:

“After a long press on the home button, the screen fades and slides up, just like with the multitasking interface. Revealed is a silver icon with an animated orbiting purple flare which indicates a ready state. From what we’ve been told, this image is a close representation of the actual Assistant interface.”

But Kim didn’t stop there. The site contracted well-known iOS concept artist Jan-Michael Cart to put together a “video representation” of the Assistant workflow. Although some minor details might be off, Kim believes it gives us a good idea of what to expect.

Those that have used the Assistant feature have said that its voice recognition is extremely accurate, and it’s expected to be a game changer. And with rumors mounting that we won’t be seeing all-new hardware next week, expect the software to be over the top.

What’s your take on the Assistant feature?