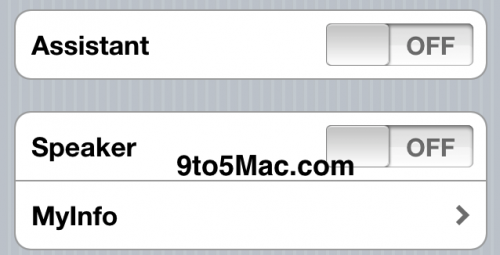 Well, it looks like their work is finally going to start showing up in iOS, as an OS-level feature called Assistant now exists in Beta 4. If you’ve been wondering what happened to all of that talk about Apple implementing a native voice-command system in iOS 5, you’re going to love this…

So, what is Assistant? Apple acquired Siri for its voice recognition technology found in its iOS application. Siri Assistant is a free app that completes tasks based on voice commands such as “Get me a taxi,” or “Book a table at a good steak house.”

Apple’s implementation is believed to be far more advanced. Users will be able to ask Assistant anything from “What’s the temperature outside?” to “What time does Harry Potter start at the Cineplex?”

Theoretically, since the feature appears to be system-level, users would also be able to incorporate data like contact information, too. For instance, the command “I need 2 tickets to the 9:00PM show for me and Tom,” would result in 2 ticket purchases and a text to Tom confirming the outing.

And the feature won’t just be using your voice input either, according to this screen capture of a disclaimer found buried in the new firmware:

Assistant uses your voice input and other information like your contact names, song names, and location to better understand your requests (talk about personal). The service will also be crowd-sourced, so Apple can improve it over time (think iTunes Genius).

What’s really interesting about Assistant is that it hasn’t shown up in public developer betas, leaving everyone to speculate on its omission. 9to5Mac suggests that Apple could be planning on making it exclusive to the iPhone 5, to help entice users to upgrade.

It’s also very possible that Assistant is still in very early stages of development. In fact, the sources who sent in the screenshots claim the feature just went into testing. They also speculate that Apple could still scrap the feature from this Fall’s release, a la 4.3 multi-touch gestures.

But if it does make the cut, then Apple could quite possibly change the way we use our phones, again. Couple this new Assistant feature with earlier findings of Nuance voice dictation software in iOS 5, and we could be one step closer to operating our cell phones completely hands-free.

What do you think about this uncovered “Assistant” feature in iOS 5 Beta 4? Do you think Apple will introduce it with the iPhone 5 this Fall?