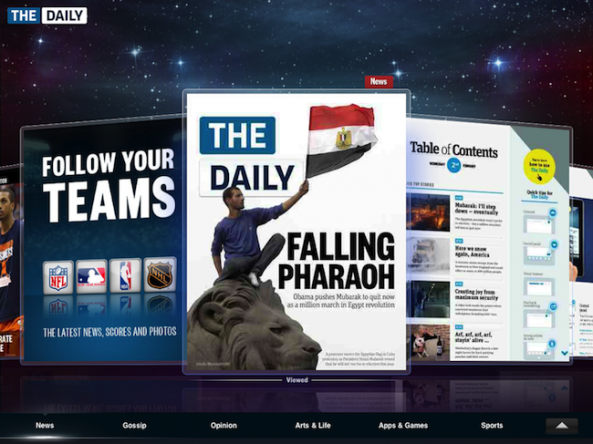 Poor old Rupert Murdoch really isn’t having the best of times is he? First there was the whole phone hacking debacle that is still rumbling along in the UK, then the same accusations found their way across the pond to the United States, and now it appears his pet project is a dysmal failure.

That pet project is, of course, The Daily — an iPad-only publication aimed at bringing news into the 21st century. The problem is, nobody is reading it…

According to numbers coming out of Bloomberg, the digital newspaper is currently being read by just 120,000 people per week – that’s just one quarter of the 500,000 Murdoch himself said they would need in order to break even, back when he was all excited about the venture. We suspect that he’s considerably less enthusiastic these days.

The figures come from John Nitti, executive vice president of Publicis Groupe SA (PUB)’s media-buying division Zenith Optimedia, who obtained the numbers because he works with Verizon Wireless, a sponsor of The Daily. Unsurprisingly, nobody was willing to comment from inside the publication.

“They won’t tell us how many paying subscribers, but that’s how many uniques the Daily is getting.”

But things get even worse for the beleaguered billionaire. See, with users who download the iPad app receiving a free two-week trial of The Daily, there is no guarantee – in fact we think it’s highly unlikely – that those 120,000 are all paid subscribers. The real number of people willing to hand over their hard earned cash for the ‘slightly-more-real-time-than-ink’ newspaper may well be considerably smaller.

We’d feel sorry for Mr Murdoch if he wasn’t so stinking rich already.