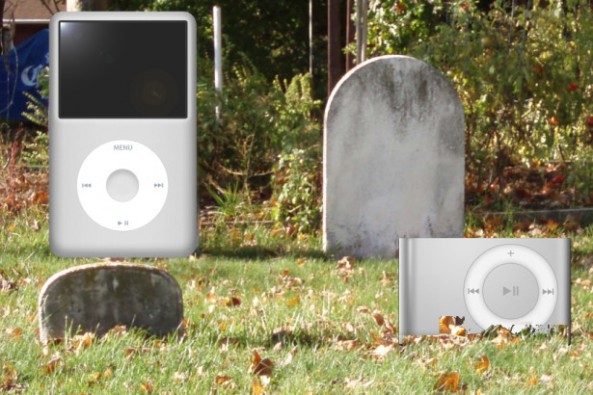 If you’ve been planning on buying an iPod Classic or iPod Shuffle, now would be a good time to do so.

Last night, TUAW corroborated an earlier report from 9to5Mac that Apple is looking to discontinue the iPod Classic and iPod Shuffle. The “product transition” that Apple hinted at during its last earnings call is apparently within the iPod product line. TUAW’s source has said that Apple will axe the two iPods this year, presumably at Tuesday’s event…

Apple’s Fall event has been devoted to the iPod in the past, but this year will revolve around a new iPhone. It’s expected that Apple will at least introduce a minor refresh of the iPod touch with a white color option and upgraded specs. The rest of the iPod line, including the iPod Nano, will likely never see a refresh again.

It’s not surprising that Apple would want to discontinue the Shuffle and the Classic. An article on CNET suggests that next week would be the optimal time for Apple to begin phasing out products in its iPod product line:

“For starters, this year (October 24) marks the 10-year anniversary of the iPod. That’s quite an achievement, but it’s also a nice place to bookend things. I can imagine Apple saying, “It had a great run, now go buy an iPhone.”

Also, the iPod just isn’t the moneymaker it once was for Apple. In the fourth quarter of 2010, iPod sales made up just 8 percent of Apple’s total revenue, and they have been in a steady decline ever since the iPhone’s introduction.”

The iPod touch is Apple’s money maker within the iPod line, so it makes sense for Apple to focus on selling that product as the premium option, with the iPod Nano still available as the cheap option for customers that just want to play music.

At the iPod event last year, Steve Jobs said that Apple was redesigning “every model” of the iPod. The iPod Classic wasn’t mentioned at the event once. Apple hasn’t considered the Classic as part of its iPod line for a long time already.

The Shuffle just doesn’t make sense in light of how cheap the Nano is and what non-iPhone owners want from an iPod in the first place. The Shuffle is a better watch than iPod.

TUAW is usually tight-lipped about Apple rumors, so we have reason to believe that the site has certainty about this news.

How do you feel about Apple discontinuing the iPod Classic and iPod Shuffle? Is it a smart move?