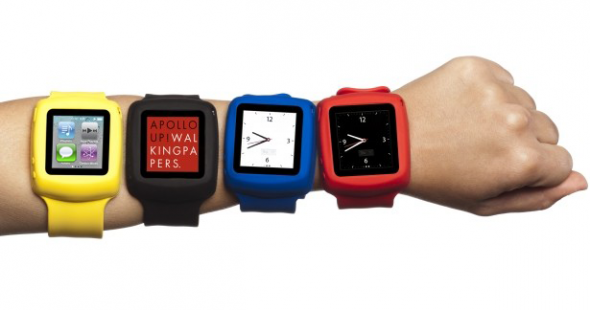 We’ve heard several rumors about Apple’s expected smartphone refresh this Fall, and even some gossip that we’ll see a new tablet. Heck, there’s even been some murmurs of a new iPod touch sporting a 3G radio.

All of this speculation has overshadowed Apple’s typical September announcement: new iPods. However, Seth Weintraub of 9to5Mac believes it will still be an eventful Fall for Apple’s MP3 player line — particularly the Nano. The tiny music player got a huge makeover last year, but that could have just been the beginning…

In September of 2010, Apple unveiled a revamped iPod Nano that was rebuilt from head to toe. They ditched the camera, shrunk the body, and added a multitouch display. The classic iPod interface was also traded in for a dumbed-down version of iOS.

Fast forward to this year’s iPod event, and you have to wonder if the Cupertino company has more improvements in store for the MP3 player. Weintraub sure seems to think so, and he points to a couple of reasons to support his claim.

For starters, you might recall a rumor going around regarding Apple using the new Bluetooth 4.0 platform in their next smartphone. The tech is characterized as being a lot more energy efficient than current offerings, and has already been embedded into new Macbook Airs and Mac Minis.

Its energy efficiency makes it a prime candidate for Apple’s iPod Nano. In fact, a lot of folks have wondered why it wasn’t implemented in the first place. Chances are, bluetooth was scrapped as an unnecessary feature that could just be added at a later time. So why not now?

The gadget has already gained a good-sized following thanks to an onslaught of wearable cases. As it turns out, the iPod Nano’s Clock app paired with a watchband-like case make for an interesting wristwatch. Now imagine adding bluetooth to the package.

It would turn the Nano into a wearable iPhone accessory. It could receive text messages, sports scores, and alert users of calendar events. In fact, it’s feasible to think that all of iOS’ push notifications could be streamed to the device. Picture something like this:

So will we see bluetooth-equipped iPod Nanos this Fall? It’s possible. Apple has been able to turn the Apple TV into an iOS accessory, and they could certainly do the same thing with the iPod Nano. The question is, is there a market for it?

Do you see Apple releasing an iPod Nano with bluetooth? Would you buy one?