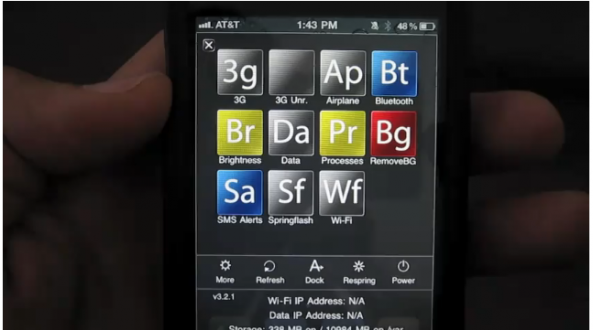 There’s a handful of tweaks and utilities that are simply a must-have for jailbreakers. Obviously, this list can vary from person to person, but I don’t think that anyone would argue that apps like Activator belong in the Cydia Hall of Fame.

Another title that belongs in that category, maybe most of all, is SBSettings. The utility makes accessing system settings and functions a breeze. SBSettings was just updated, and all of you early adopters will be happy to hear that it’s now iOS 5 compatible…

Since Apple unveiled the new Notification Center in iOS 5, there has been speculation that SBSettings wouldn’t make the leap to the next firmware. With space available in the drop down menu, many believed we’d see the utility reincarnated as a widget.

UISettings is a good example of a Settings-focused widget, but it doesn’t have near the capabilities of SBSettings. Well now folks who are running the beta version of Apple’s next major software release can enjoy the real thing.

The most recent update to the utility brings it to version 3.3.1, and among the changes is added support for iOS 5. A lot of developers have been hesitant to update their apps for the beta software, but with a public release nearing, they’re starting to come around.

To download SBSettings for your jailbroken iOS 5 device, just pop into Cydia and add the http://thebigboss.org/ios5beta/ repo to your list of sources. Keep in mind that it’s still in beta itself, but early reports say the utility works well.

Have you tried SBSettings on iOS 5 yet? Let us know if you run into any bugs in the comments.