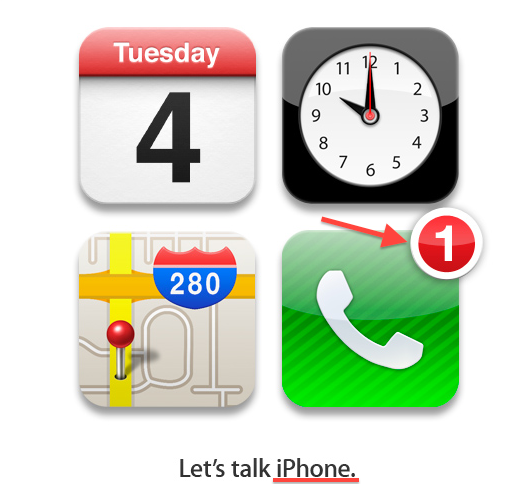 Today Apple sent out invites for its October 4th media event where the curtain will be lifted on all things iPhone.

Interestingly, the image that Apple used on the invites may provide a clue as to what we can see come October 4th at 10:00am PST.

The image contains the Apple 1 Infinite Loop campus in the Maps app (where the event will be held), the correct date (Calendar app), the correct time (Clock app), and one more little interesting tidbit…

Did your eagle eyes catch it? That’s right, a one (1) notification badge on the Phone app. Now of course, this could just be a coincidence, but seeing as everything else coincides with a real world fact, I think it’s highly probable that Apple just confirmed that we’ll only see one iPhone on October 4th.

Not to mention that fact that the message says “Let’s talk iPhone.” Singular.

Apple may have also just hinted at the super secret “Assistant” feature that was detailed yesterday.

This could also be Apple’s method of easily letting down any ridiculously high expectations for next Tuesday’s event.