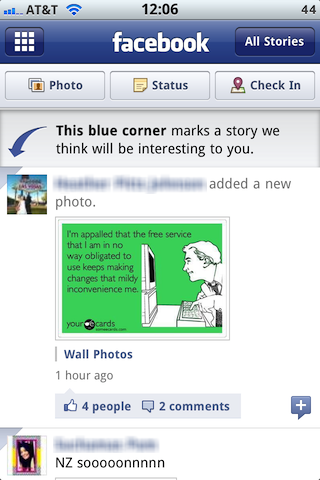 #NewFacebook is trending worldwide on Twitter right now. For those who aren’t familiar with Twitter’s services, Trending Topics are the top 10 most tweeted words or phrases at any given time.

The tweets are in response to a recent update that Facebook started rolling out at the beginning of the week, which makes some major changes to the service. And as usual, the changes have made their way into the iOS app…

You might have noticed that your timeline in the Facebook app looks a little bit different than it did before. That’s because now both your Top News and Most Recent feeds have been combined into your news feed.

Here’s Facebook’s explanation of the changes:

“If you haven’t returned in a week, you may want to see a summary of top stories first. If you’ve already visited several times that day, you probably care more about recent news. Starting today, it will be easier to keep up with the people in your life no matter how frequently you’re on Facebook.”

As The Next Web points out, the new update gives Facebook sort of a Google+ vibe. And judging by the comments on both Facebook’s blog and Twitter, people don’t seem to be very happy with the new look.

I actually like the fact that they’ve made it easier to sort by photos, but the other changes seem more confusing than anything. If you aren’t seeing any differences yet, don’t fret. The update should hit you by the end of the week. Now, where’s that iPad app?

What do you think of the new Facebook update?