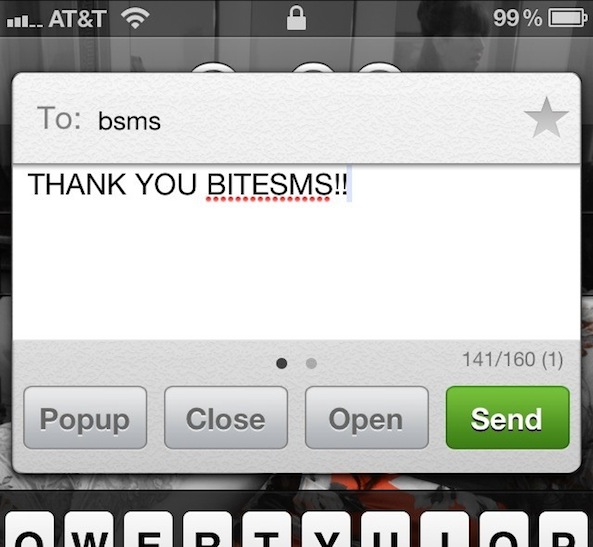 BiteSMS is without a doubt my favorite jailbreak app. I use it several times a day to write and read text messages. Up until now, you couldn’t run BiteSMS on a jailbroken iPhone running iOS 5 beta. But due to the overwhelming demand, the BiteSMS team has decided to release an iOS-compatible version of the app.

Because it is in its early beta development, you can expect BiteSMS to have quite a few bugs. However, the die hard BiteSMS fan that you are will most likely see past those issues and focus on the exciting new features…

In iOS 5, there is deep BiteSMS integration with Notification Center and iMessages. The Quick Compose and Quick Reply popups got a nice facelift, as you can see in the image above.

“Due to the overwhelming number of emails from users wanting to be private beta testers, we have decided to release this iOS 5 compliant version via a public beta repos.

This is a very early beta release, so at this stage please don’t email us bug reports as we most likely know about them. This is not a normal beta, it’s more that users running iOS 5 would no doubt prefer something as opposed to nothing!!!

Saying that, it’s a pretty stable release and we hope you like the new look Quick Compose and Quick Reply plus the deep integration with the Apple Notification Centre. Also iMessage works seamlessly inside biteSMS.”

To install this beta version of BiteSMS, you must be on iOS 5 beta and add the following source: http://test-cydia.bitesms.com/. Tools like RedSn0w can jailbreak the latest versions of the iOS 5 beta.

Note that you must do a tethered reboot after installing the app.

It sure is looking good, isn’t it?