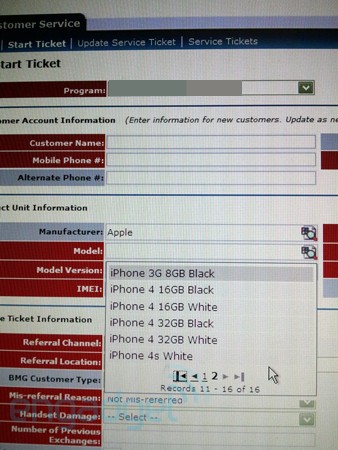 Hold on to your hats folks, Engadget just dropped a bombshell. The tech blog just published a photo it received from a tipster that appears to be of a screen from AT&T’s internal retail software.

The screenshot looks like it was taken from the carrier’s trouble ticket system, a place where reps can pass issues on to tech support. What’s so interesting about the pic? It seemingly outs a new Apple device — the iPhone 4S…

The timing of the snapshot is intriguing, considering that just a few days ago The New York Times confirmed that Apple will be unveiling two new devices this Fall. The 4S is expected to be the low-end model, as essentially a rebuilt iPhone 4.

Enter the skepticism. For starters, the name looks a little off. With previous iPhone models, Apple has capitalized letters in its name. It’s the iPhone “3G and 3GS,” not the iPhone “3g and 3gs.” The pic also falls in that “Why’s it so blurry?” category.

The spacing in the iPhone 4s label also looks a bit off, and there is no mention of its storage size like the other models. All things considered, we’re calling fake on this one. Here’s hoping Apple breaks the silence next week, the suspense is killing us.