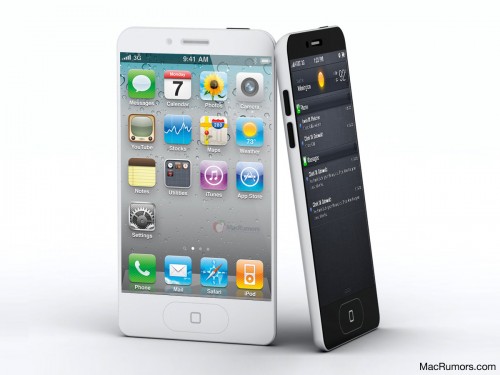 Last night we told you about a report from The New York Times quoting multiple Apple employees that a “fairly different” iPhone 5 was only “just weeks away.” The report didn’t specifically mention the rumor of Apple announcing two new iPhone models at once, and now 9to5Mac is claiming that there are some interesting developments in the iPhone 5 department.

According to 9to5Mac, Apple is indeed working on two iPhone models, but the iPhone 5 design has seen production delays. While a re-tooled iPhone 4 will be available this Fall, a completely redesigning iPhone 5 won’t be seen until early 2012…

“We’ve heard that there are indeed two different models of iPhone coming out next month (announced this month?)  We still think October 7th is the scheduled release date give or take any delays.  We’ve heard the low-end model, which is essentially an iPhone 4 look-alike (glass front and back), is rolling off the assembly line in big numbers right now.  Apple expects to have 10+ million of these things on hand for launch and full ramped production into the holiday shopping season.  These will be priced aggressively and be everywhere. They will also be offered in both prepaid and post paid plans.”

“It appears that the tear-drop shaped iPhone 5 with larger screen and thinner, rounder body is seeing continued design and production delays, at least on one assembly line (Apple has multiple production sources – Pegatron, Foxconn, etc).  We therefore think that iPhone 5 will be delayed slightly at the very least and may see shortages all the way into 2012.”

9to5Mac goes on to reaffirm previous reports that the iPhone 5 will feature a gorgeous ‘teardrop’ design and be “impossibly light.” The camera on the device will allegedly rival most point and shoot cameras, and the iPhone 5 will likely feature an aluminum frame and back.

Case leaks from yesterday strongly indicate a significant redesign for the iPhone 5.

For the past 4 years, Apple has always introduced an iPhone in the summer. This year is different, so everything is up in the air. Speculation and leaked information starts pouring out during the weeks leading up to an Apple announcement, and Apple has yet to send out invites to the event.

It’s important to note that Apple has taken over a year to hold an iPhone announcement, so it’s a huge gamble to say that the smartphone maker won’t introduce a device that leapfrogs the market all over again. It’s highly unlikely that Apple would simple relaunch the iPhone 4 this Fall and wait until 2012 to pull out the big guns.

What would you think if Apple chose to not unveil the iPhone 5 at its next announcement? If your 3GS contract just expired, would you wait till 2012, or just go ahead and upgrade?