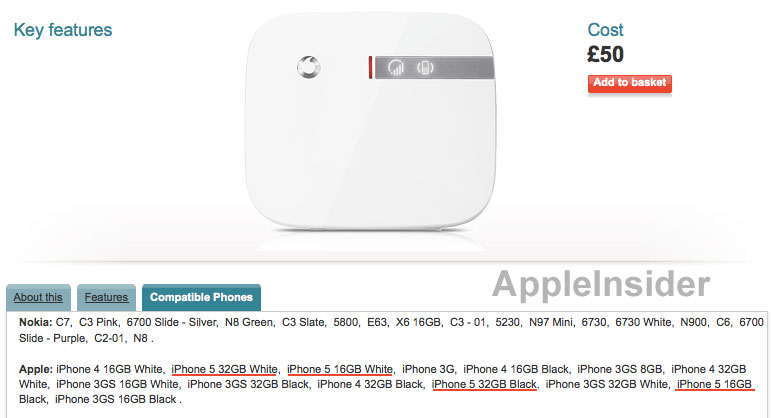 An interesting little tidbit this Sunday morning, and as is so often the case recently, it’s more iPhone 5 news. This particular story comes courtesy of one of the UK’s largest carriers, Vodafone.

A product listing on Vodafone UK’s website appears to have dropped the bombshell that the iPhone 5 will come in 16GB and 32GB flavors only, meaning no 64GB storage bump this time around…

The product in question is Vodafone’s Sure Signal unit, which is built to extend Vodafone’s coverage in more signal areas. The product’s web page has a list of compatible products, and there you would have found listings for the iPhone 5 in 16GB and 32GB models, and in black and white. We say would, because if you hit the page now, all mention of the iPhone 5 has been removed. A smoking gun, perhaps?

Also worth noting is the inclusion of both colors, meaning none of the crazy delays just for a spot of white paint this time around.

None of this really means anything of course, with Apple expected to hold an announcement event sooner rather than later, and an early-October release date very much looking on the cards.