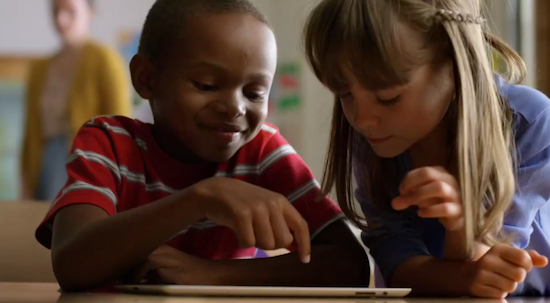 Apple has launched another new ad to show off its iPad 2, with the theme this time around being learning.

Running just 31 seconds long, the new commercial runs through a variety of apps, with the common theme being that we can all learn something new, whether it be a new language, a new skill, or even mastering a skill we didn’t know we had…

The commercial opens with a user watching a video using the TED application, and goes on to show off a chess simulator, an app for learning how to draw Chinese characters, and an astronomy app. Apple’s floundering iBooks also puts in an appearance, with its built-in dictionary getting some on-camera attention. Shockingly, Apple’s PR team don’t go on to mention the Kindle app.

The final scene shows children using a fun learning app with the tagline ‘there’s never been a better time to learn.’

We can’t argue with that!

Apple’s iPad and iPhone ads are currently taking the approach of showing off features and applications, with apps being seen as the key differentiator between the iOS ecosystem and that of its competitors. With Android’s tablets struggling for apps, the iPad has a clear advantage in the market.