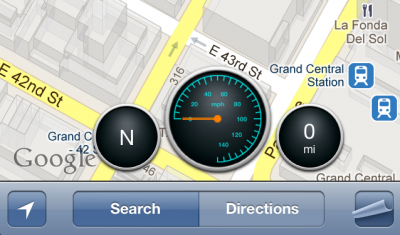 Over the last few weeks, we’ve seen an increase in interest from jailbreak developers regarding the iOS Maps application. We’ve seen Speed for Maps, which adds a speedometer to the Maps app, and a Compass tweak that does the same thing.

Now there’s is a utility available that will not only tell you how fast you are going and where you’re headed, but also display your elevation. It’s called DashBoard for Maps, and it just went live in Cydia…

If you happen to be a hiker, or you just find yourself using the stock iOS Maps app a lot, you’re going to love DashBoard for Maps. The tweak overlays a heads-up display on top of the application with three very handy tools.

It includes a compass, a speedometer and a gauge that displays your current elevation. I have to say that the graphics look pretty sharp, but the gauges themselves are fairly large. Even at the bottom, they kind of get in the way.

The utility had issues judging my speed correctly, but the compass was spot on (obviously). And I live among the flatlands, so the elevation gauge stayed comfortable at 0mi.

As aforementioned, this tweak is geared at a particular audience. Obviously if you don’t use the Maps app very often, I wouldn’t recommend it. But for those that do, you’ll have no problem dropping $1 on Dashboard for Maps.

Have you tried it? What do you think?