If you are a Mac user, chances are you’ve at least heard of the Sparrow email client. The app is minimal compared to the bulky default Mail software, and features a simple user interface and quick load times.

Word on the street has been that the Sparrow team might be looking to bring Sparrow to the iPhone. Business Insider recently spoke with Dominique Leca, the co-founder of the popular email client, about the gossip… 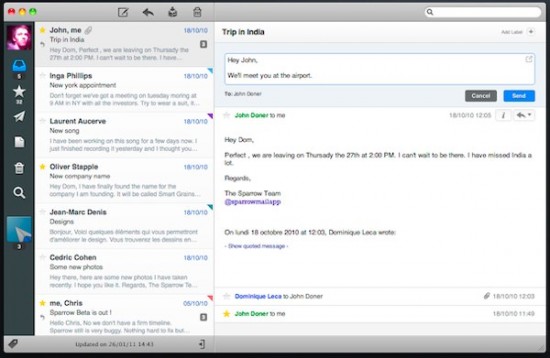 “BI: Isn’t one of Apple’s rules for the mobile App Store that you can’t “duplicate functionality?”

DL: Yes, but on the Mac, they can’t really apply it, so you’ve got a way out. You can license your software without being considered a rogue developer, like you might on Cydia.

Developers have been selling Mac apps long before the MAS was introduced, whereas for most people, the only want to get content on an iPhone is straight through the App Store. It was a walled garden from the very beginning.

We’ll see what happens with Sparrow for iphone. We’re just starting on this, but it’s still far far away. But we’ll give it a try, Apple be with us.

BI: So do you think they’ll approve it?

DL: I think they well. They’re accepting third party browsers, why not mail? This would be really inconsistent. Opera has a browser out there, and I think Mozilla has one coming too.

A quick search of the App Store for the term ’email client’ only returns around 20 results, so there is definitely opportunity there. And as MacRumors points out, Sparrow has sold over 50,000 copies on the Mac platform, so they certainly have an audience.

The question here, obviously, is if Apple will approve the application. The Cupertino company has a long history of denying apps for various reasons. It’ll be interesting to see how this one plays out.

Are you hoping Sparrow gets approved? Do you think it will?