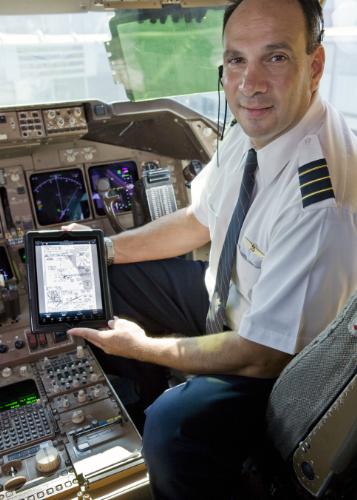 United Airlines has announced that it will officially be switching from the traditional 12,000 page “flight bag”(operating manuals, logbooks, reference handbooks, navigation charts, etc) and opting for a more modern approach by handing out 11,000 iPads to Continental and United pilots.

“The paperless flight deck represents the next generation of flying,” said Captain Fred Abbott, United’s senior vice president of flight operations. “The introduction of iPads ensures our pilots have essential and real-time information at their fingertips at all times throughout the flight.”

Not only will the iPads significantly ramp up efficiency by saving pilots from navigating the presumably clunky 12,000 sheets of paper that make up the conventional flight bag, they will also save approximately 326,000 gallons of jet fuel per year, according to the press release:

“The airline projects EFBs will save nearly 16 million sheets of paper a year which is equivalent to more than 1,900 trees not cut down. Saving 326,000 gallons of jet fuel a year reduces greenhouse gas emissions by 3,208 metric tons.”

This certainly isn’t the first time we’ve seen iPads being used as a more efficient alternative; restaurants have begun replacing menus, credit card readers, and cash registers with the tablet, and schools have long been handing them out in lieu of laptops.

Other businesses are bound to adopt the iPad to work for their own needs and perhaps render a lot of traditional hardware extinct in the process.

In what other scenarios could the iPad be used in to help increase productivity/efficiency?