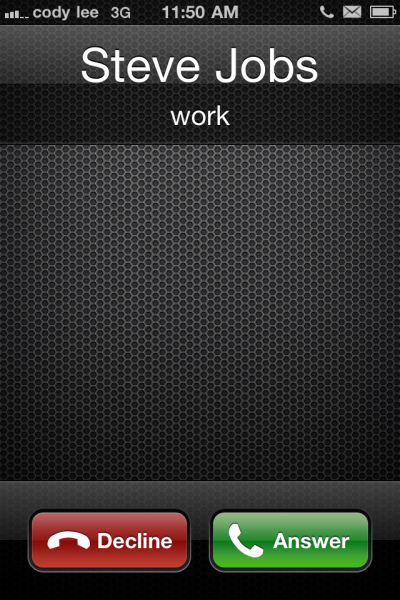 If you’ve had an iPhone (or any smartphone) over the last few years, chances are you’ve seen Caller ID spoofing. Basically, it’s an app that will change your outbound Caller ID information when making a phone call.

But most of the apps for the iPhone are sketchy, and usually require money after the first few calls. Luckily, infamous jailbreak developer moeseth has created a similar tweak to help feed your inner prankster…

The major difference between this jailbreak tweak and other utilities like iSpoof, is that FunnyCaller only lets you customize the caller ID for incoming calls — not outbound. So, essentially, your victims have to be in the room to catch the joke.

FunnyCaller is just a simple tweak that allows you to customize the name of incoming callers. Once installed, simply pop into your Settings app and change the name to whatever you’d like. “Excuse me, I have to take this. It’s Mr. Jobs.”

The utility is another TweakWeek submission, meaning it was put together in under 24 hours. Obviously it lacks the features found on other spoofing apps, but it also lacks the price. FunnyCaller is available in Cydia for free.

What do you think of FunnyCaller? Useful for a good prank?