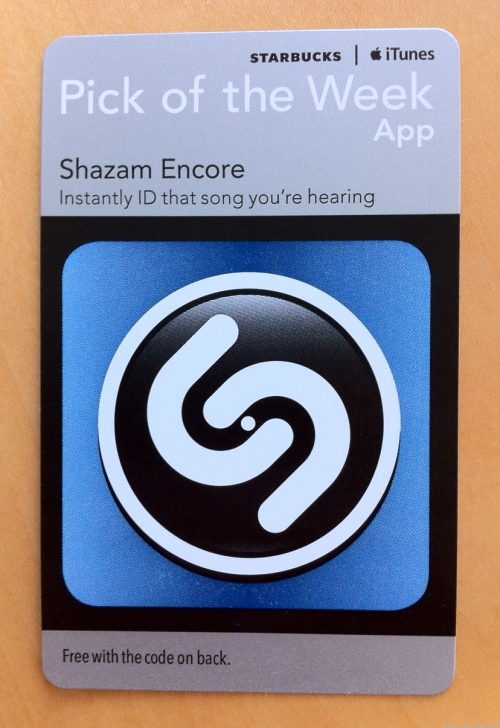 In a move that is likely to make most of the iDB staff weep for joy, Starbucks and Apple have just started a new promotion. The deal allows Starbucks customers to download a free application as they sip on their beverage of choice.

Starbucks is a long-time Apple partner, and has offered free iTunes downloads in the past. But now it looks like the pair are ready to take the relationship to the next left, with the Starbucks App Pick of the Week…

The promotional iTunes cards (seen above) allow customers to download one free app via an iTunes promotional card. The Pick of the Week cards contain a redemption code that allows the holder one free app download.

As 9to5Mac points out, the two companies must be taking this new promotion seriously. The first free title up for grabs is Shazam Encore, a track identifying app that normally sells for $6.00.

The idea is actually pretty clever. If I had the choice between multiple coffee shops, and one was giving away free apps, I’d more than likely end up going there. I expect to see more digital partnerships like this spring up in the coming years.

Marketing wise, is this a smart move? We’re considering a lawsuit, since Starbucks clearly ripped off our own “App Picks of the Week” terminology. (Just kidding.)