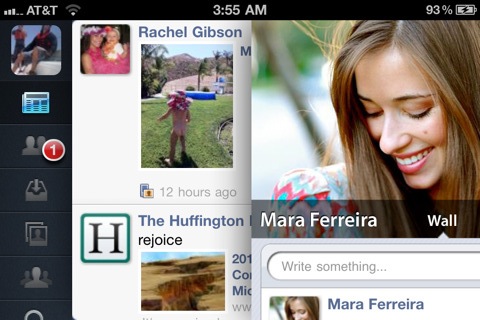 MyPad was released for the iPad over a year ago and has been a huge success ever since, with reports claiming it has been installed on over 5 million iPads, with over 2 million active users a week. One of the main reasons for its success is it’s both unique and beautiful user interface.

With MyPad’s migration to the iPhone, do users finally have an above average Facebook app? Unfortunately, the answer is still no…

MyPad’s main flaw is that it’s landscape-only. This is very annoying, as Facebook is the most opened app on a lot of iPhones and having to switch orientation every time you open it is a no-go.

The best features of MyPad are the user interface. The way photos are viewed look great and the use of multiple accounts works well. In terms of speed, it is on-par with the official app.

There are still a lot of bugs that need to be ironed out, but if changes are made, this could be a real replacement to the official Facebook for iPhone app. But for now, it’s simply a way to test the beautiful user interface.

You can download MyPad for Facebook for free in the App Store. Have you tried it yet? If so, what’s your take on it?