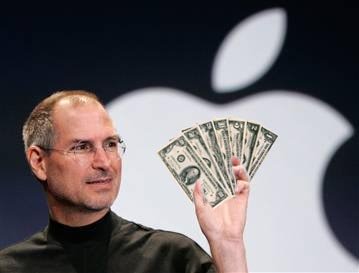 Yesterday, Apple briefly became the most valuable company in the world, passing ahead of Exxon Mobile, and falling behind the oil giant again minutes later.

This got Wall Street and tech journalists thinking. When is Apple going to pass Exxon and settle as the most valuable company for good? Is Apple undervalued? Is Apple a trillion dollars company?

Robert Cyran for The New York Times reflects on Apple being underpriced:

“Apple now trades at about 11 times estimated earnings for the fiscal year ending September 2012. The Standard & Poor’s 500-stock index is valued at about 10 times next year’s profit. But Apple’s sales growth is nearly 10 times faster than that of the average company. Apple also holds $76 billion of cash and investments. […]

Alternatively, put Apple on the same P/E multiple it traded on in 2006, and it would be worth almost $900 billion. A premium for today’s faster growth could get it to $1 trillion.”

Cyran believes Apple is underpriced and should be valued at a much higher price, but it’s not because investors can’t fathom the idea of a trillion dollars company. It’s just too big, unseen, and unheard of. Quite frankly, it’s scary.

Just like every company, Apple is not going to last forever, but I suspect it has many more successful years ahead.

I’m no Wall Street guru, but I do believe Apple is underpriced. They own the tablet market, they drive the smartphone market, they lead the music and app market, and they are now aiming at taking over your living room. And it’s just starting.

The stock isn’t cheap but it’s still a good deal. It’s time to break that piggy bank and invest in Apple.