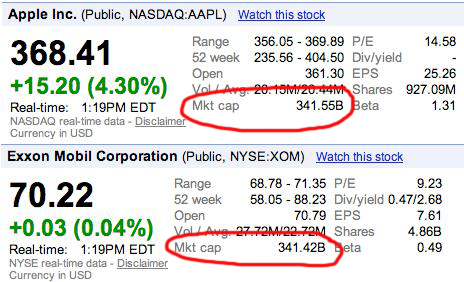 In an interview with Edge Magazine, EA founder Trip Hawkins commented that Apple would soon see its downfall. He noted that it wasn’t necessarily Apple’s own fault, but that history has taught us how peaking empires always falter.

Hawkins was right about one thing: Apple has peaked. Not in terms of innovation or profit, but for a brief moment Apple was the most valuable publicly traded company on the market…

After announcing another record-breaking quarter last month, the tech industry noted that Apple had moved into the second spot on the list of most valuable companies in the world. They were $50 billion dollars shy of ExxonMobil.

Today, as noted by MacRumors and others, Apple briefly overtook Exxon as the number one company by market cap. No, Apple didn’t rocket up in price, they just didn’t sustain the losses that other companies did during the market’s recent downturn.

As of this writing, Exxon is back on top, but there have been multiple lead changes. Now that they’ve sat at the top, the question is how do they get back up there. For good? I guess we’ll find out more this Fall.